Tour De Timor - We Made It

The Tour De Timor has been run and won. Well in fact, it was completed a good few weeks ago. But since the AQR girls from down under put in such an amazing effort, we'll just ignore my laziness....
Saturday - Arrived in Dili from Darwin.

For those of you who may be a little in the dark about the race and why on earth we went there.... East Timor is the world's youngest nation. A Portugeuse outpost for a few centuries, when they withdrew in 1975, East Timor's closest neighbours the Indonesians arrived. With guns. It wasn't until 1999 that the Indonesians relinquished control following a UN sponsored act of self-determination. But their razed earth policy meant that 75% of all buildings in East Timor were destroyed as a result.

The nation is incredibly poor but is attempting to re-build with a very strong focus on peace. The Tour de Timor is aimed at celebrating the country, its culture, and showcasing it as a fabulous adventure travel destination. And it certainly is that.... 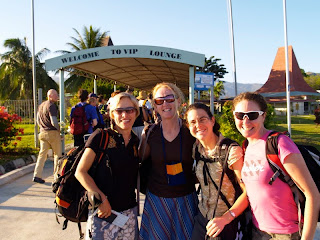 So anyway.... were welcomed to Timor Leste via the VIP Lounge. The AQR team, left to right was Sue, Libby, Claire and Rachel. I'm the one taking the picture. 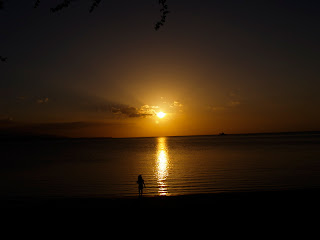 Sunset in Dili on Saturday night. We had a relaxing day cruising round Dili and had dinner with our local guide and friend Martin.

Sunday - Dili. We chilled out and waited for our bikes to arrive. Lets just say getting 300 cyclists and bikes from Darwin to Dili wasn't easy for the small regional airline.... 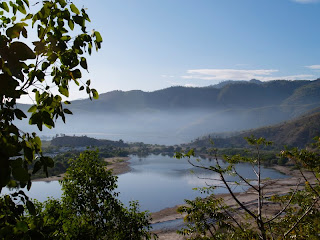 Not one to worry, Claire borrowed a bike and had a short foray into the hills. In the end the bikes arrived 15 hours before the race start... 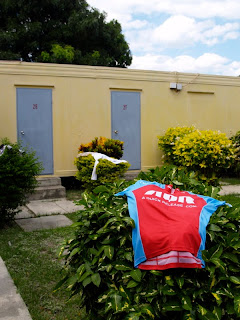 Accommodation in Timor Lodge was basically in shipping containers with air-conditioning... Still the few shrubs came in handy for drying washing. 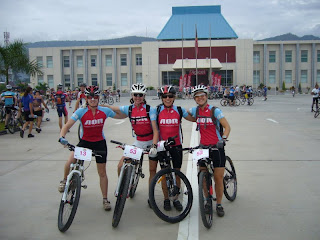 The presidential palace in Dili hosted the start.

The stage was fast and furious but long. And those two climbs were killers. But we all made it to the finish ok. It was just afterwards.... 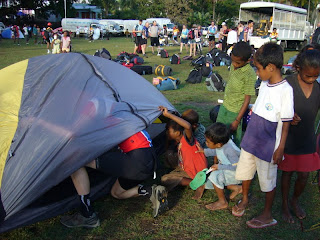 Whilst Rach was recovering in the medical tent from over hydrating, I got some local help putting her tent up.

Tuesday - Stage 2: Balibo to Suai 95km
The stage could best be described as EPIC. It took its toll physically and emotionally with the winners finishing in 4 hours but mere mortals taking up to 11 - they cancelled the 'cut off' because there wasn't enough transport to get all the stragglers home. After struggling over the mountains and taking it easy on the descents (Sue was only masquerading as a mountain biker), the AQR girls made it in just over 6. 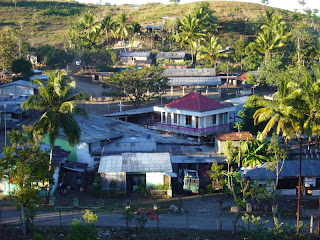 After a crazy start through Suai's streets, avoiding scuttling pigs and other livestock, we headed out on 50km of pot holed dirt road with rough rocky sections for variety. It was flat and would have been lovely if we hadn't been trying to ride fast. Thankfully after 50km, the potholes ended. It's just that they were traded for a 15km climb... It's never easy in Timor! 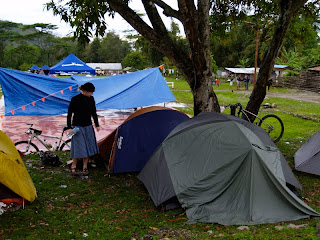 Team AQR team made it before the tropical afternoon storm dumped its contents. We found a terrace to camp on which was as dry as it would ever be in a tropical downpour.

The profile looked a lot like Stage 2 and the team lined up on the start line with trepidation. But the enormous climbs were shaded with dense rainforest on one side and intermittent, amazing views of the valley and mountains on the other. Once over the pass at 1860m it was time for some brilliant descending and even more cheering villagers as the population grew denser. The next couple of climbs were a lot smaller in comparison and the finish came not too many hours after the start.

Unfortunately, we would have like to finish slightly sooner... The AQR girls' main competitors, Trailmix made a massive effort to ride as a team for the first time and managed to take second by a whopping 8 minutes. 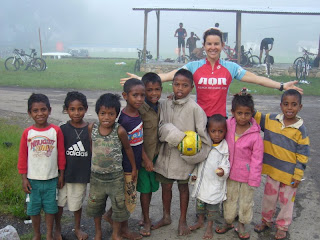 Not to be deterred, after the stage, Claire made friends playing football with the locals. Surely she could have had a shower first?!?
Friday - Stage 5: Aileu - Dili 57km

Very early in the stage we passed the entire Trailmix team and two Torq girls (overall leaders) fixing a flat. The race was now on. Raceday Claire arrived and she was stomping. I too was doing ok and very happy to be a good domestique. We all gave it everything to make up time and regain 2nd on the team classification.

Towards the end of the stage there was an exchange between Claire and Rach whilst I pretended I was Jens Voigt. Claire had been encouraging all day but when Rach was strugging with the pace, this is what was said...

Claire: How about you try eating some cement instead...

Claire was really worried she'd gone too far because Rach was very quiet but as Rach let us know afterwards, it was just what she needed! Lucky, we could have had a mutiny on our hands!!
A few minutes later as the chase group was dwindling
Torq Rider: Its the last day, why don't you guys relax and have fun?
Rach: We are.
With 5km to go Claire rode off the front of the group to secure 7th women on the stage. 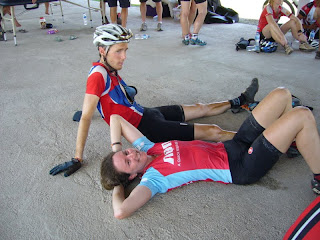 Rach and Paul at the finish. Its fair to say that he had turned himself inside out riding for team AQR but it was all worth it. Libby, Claire and Rach had found some great form to secure the women's team stage win for Team AQR. It was great to beat the Torq girls and try a put ourselves back into second. 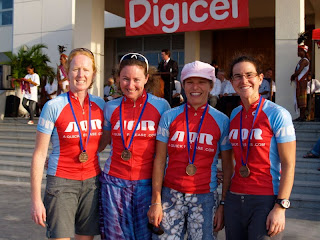 Bronze medals in the women's team classification was a little disappointing. A "clarification" of the times led to AQR being relegated to third. At least Libby, Sue, Rach and Claire KNOW they did the impossible and clawed back 8 minutes on the last stage. Sue stood on the podium again, taking out the veteran category.

Well, as I said, the race has been run and won. Not by AQR but there's always next year right?
Mmmmmmm, maybe.
Posted by Paul and Claire's MTB Adventure at 12:47