A few months back when Paul suggested that Adrian and I would go pretty well at the local Perth 12 hour race, it sounded like a fun idea. Especially as Paul had offered to be our trusty team manager.
Adrian Middleton is a fellow Canberran who has moved to Perth and regularly rips my legs off in our afternoon training rides. And whilst he's not technically an AQR rider, there really aren't that many of us around down under so I was prepared to mix the team up a little...
It wasn't until a couple of weeks out that Adrian realised the 12 Hr was actually a dusk till dawn. But he took it in his stride and when the weekend arrived and temperatures in the high 30's were forecasted, riding all night suddenly seemed like a good idea. 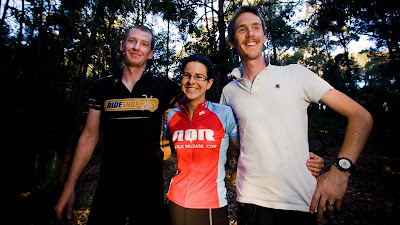 Team Delta-AQR. Please note: Paul's moustache was for fundraising purposes only and it has thankfully, now gone.

There were 400 entries in the race, many in teams of 4, 3 and 2 and the standard die hard soloists as well. The course was perfect. Plenty of fantastic singletrack, fast flowing descents and just a few climbs but nothing that ripped our lungs out. And straight away, Adrian managed to get us in a fairly decent position. In fact he entered the first section of single track in 5th and finished his first lap of the 17km track in about the same place. 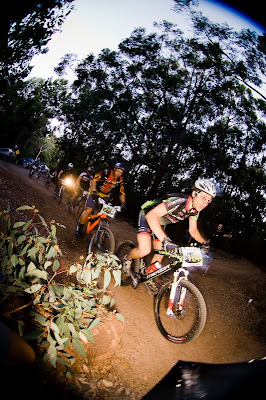 The race leader heading into the singletrack on lap 1 in the late dusk.

When Adrian came sprinting into transition, I grabbed his CO2 canister (yup I'd forgotten mine) whilst Paul transferred the timing chip and velcro strap from one ankle to the other. I think I got out about 20 seconds after Adrian had arrived so Paul was proving his management skills already.
Out on course it was pitch black and at the pointy end of the field, it was actually pretty lonely - I wan't about to catch anyone and strangely, it wasn't until 20 minutes into the lap that someone turned up behind me. I hadn't ridden the trail and felt like I was breaking in all the wrong places and generally riding slowly. But with some reassurance from Paul when I returned and a check of my lap time, I felt better. 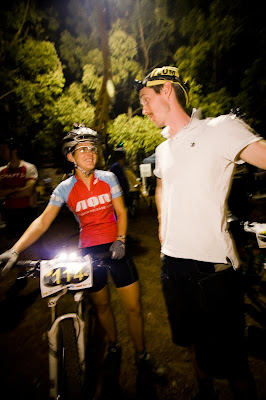 Come on, come and eat some dinner!

As the night wore on, Adrian and I settled into pretty consistent lapping. Adrian continued to ride strongly doing laps of around 56 minutes and I was coming in after an hour flat. 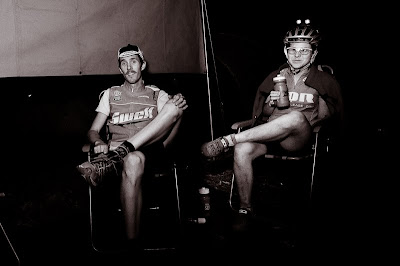 A chill out whilst Adrian was out smashing another lap. 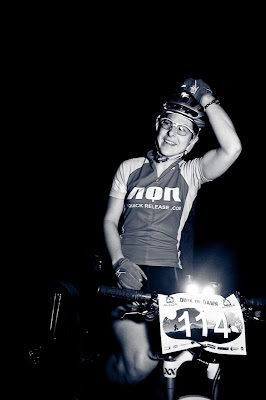 Attempting not to blind people whilst looking around in transition 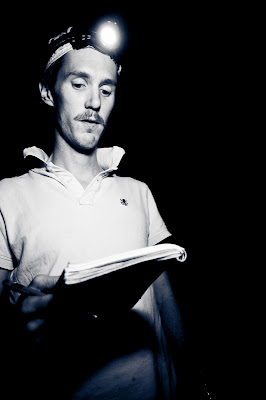 Consulting the official team timing book.... Nobody but Paul was allowed near the pen. 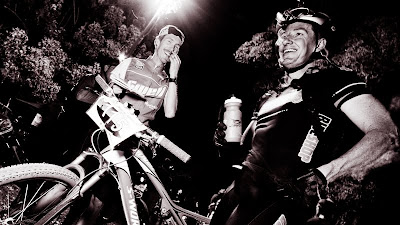 Good times
As the night wore on, our cheer squad of James and Jason hit the road, with Jas taking his camera with him. But the fun out on the trail kept going. The wildlife was out (plenty of spiders, a few possums and at one point, even a family of kangaroos). We managed to get Paul to go to bed at about 1am but when I came in from my double at 4, he was up and back helping by preparing food, drink bottles, timing checks etc. If anyone is looking for a great team manager, his rates are quite competitive...
Anyway, to cut a 12 hour story short, Adrian went very hard when the sun came up and I tried to do the same. We had had the mixed pairs competition sewn up fairly early but it wasn't until the presentation that we knew how we'd done overall. So, out of 164 teams entered, we ended up 7th overall and managed to take out not only the mixed pairs but the pairs in general (27 teams raced). The guys who 'won' the men's pairs didn't look so happy when the presenter reminded them that they'd actually been beaten by team Delta-AQR....
But saying that, I have to put in a special mention for our mate Chris Fisher (said with a kiwi accent). Chris raced and won solo, did the same number of laps as Adrian and I and came in 4 minutes before us. Top effort from a top class rider.
And huge thanks to the race organisers for putting on a brilliant event, our trusty team manager Paul and our photographer Jason Chua.
Posted by Paul and Claire's MTB Adventure at 23:35

Email ThisBlogThis!Share to TwitterShare to FacebookShare to Pinterest
Labels: By Claire Aubrey