The final race of the year for the AQR team saw 12 hours of fast and furious racing down south at the Gorrick-run Torq12:12 event last Sunday.

[As usual, huge thanks to Joolze Dymond for the superb images]

Blue skies and sunshine for all but one lap combined with the usual classic rooty, twisty Gorrick course design to make for a fantastic event from midday to midnight on Sunday.

All in all a smooth race for the team, including hats off to Iain for getting in 3 laps before his injured back & leg - which originally suggested he wouldn't be racing at all - started to tell. Massive thanks to Kate who travelled all the way from Edinburgh for her 4 laps, whilst Rich took the fastest lap of the team award with a 39m30s sprint round early on. Finally, James racked up the most at 6 laps, including an unplanned double, the 2nd lap of which started at 11.48pm! Unfortunately his legs hadn't planned for it and the team dropped to 6th place by just 2 minutes at the end. A respectable end to the year though in a tough category. 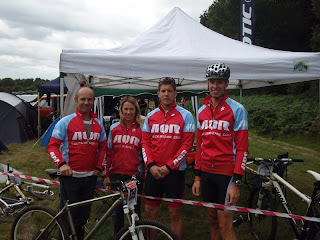 The race itself wasn't the only highlight of the weekend though, as Kate had her freshly built new Cotic Soda out to play for the first time. Complete with Hope/Stans wheels, KCNC chainset, Magura Durin forks and Bontrager finishing kit, it truly is a work of art and she was raving about it every lap - more on her thoughts as it eats up the miles! 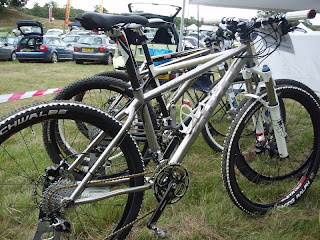 And finally, congrats once again to Kate for her win back in early August at Scottish XC Round 5, which she took by a convincing 6 minutes!
Posted by James Dymond at 22:06