Bristol Bikefest
Straight off the back of the Hopton Woods national round, I teamed up with AQR team mate Matt Prior and entered the 6 hour Mixed Pairs Sunday race at Bristol Bikefest. No rest for the wicked though, AQR Coach Kate Potter had both Matt and I training hard the day before and going into the race with tired legs; it was after all just another training session!

Thankfully it was a lovely dry, sunny day but with a bit of a breeze and reports were that the course was dusty; perfect. We managed to solve the pre-start mechanical of the day easily thanks to Matt having brought a spare set of wheels;  he’d managed to shear his valve off his wheel! I was hoping that was the first and last mechanical we had to deal with.

In true team spirit I told Matt he was up first as that was the tradition in mixed pairs. I also didn’t fancy the run. Matt looked to be going well as he made it up the fireroad climb and after he took his bike that was it, just had to wait around and keep the blood flowing in the legs. Soon the first riders were back in the arena and I thought I should perhaps go and lurk but wasn’t sure how long Matt would be; but suddenly he was there and in first place. I ran out transition and hopped on the bike and was immediately into such a dark patch of trees I could barely see the trail. For the rest of the lap it was the normal Ashton Court course however I felt like I was riding like a complete novice with the bike kicking me all the time.  I was caught and overtaken by Hannah Densley, at first finding it difficult to pull back to her. However, I eventually discovered that I was riding the climbing singletrack better. Hannah crashed or had a mechanical at one point and I went back in the lead.

When Matt came back from his next lap we were just in second place again and the chase was on. This time I managed to catch and then overtake Hannah and make it stick. As the day went on Hannah and her partner remained close to us, but soon enough we started to eek out a lead going from 30secs to 1min 30secs and a little more.  I had also pulled myself together and had the bike under control. Fortunately the pre-start mechanical was the only bike issue we had all race, the only other issue for me was my legs willing me to stop as they were so worn out, however I never let up and just dug deeper. In the end we finished 1st, with a 5min 43sec buffer. It was a really great day and with some close competition too that made both Matt and I keep pushing right until the finish line. 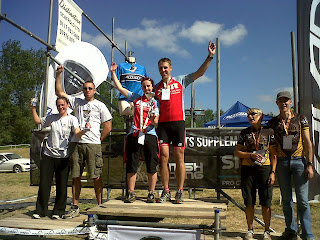 The next national race day came around and I was feeling better than expected, but first of all we had to contend with a 30min delay to our race start due to an ambulance on the course (which turned out to be for my AQR team mate Katie Collins). I got quite a good start and got myself into a good position on the wheel of WXC racer Carla Haines. I thought if I could hold this position for a while I would be doing extremely well. Unfortunately soon after  my legs threw a wobbly and I was back to struggling on any sort of gradient. It remained this way for the rest of my race until I was passed by Trek Factory Racing rider Rebecca Henderson and had to finish. This race was possibly the worst of the year for me, however I have put it behind me and moved on. There will always be blips in the season and this was just one of those.

As for Katie, fortunately it was ‘only’ a shoulder injury however having travelled all the way down from Scotland it wasn’t a great way to end the weekend and she had to contend with a very uncomfortable journey home. Speedy recovery wishes to Katie.

British National Championships - Cathkin Braes
A trip north of the Scottish Border to Glasgow was the score for this year’s National Championships and testing out the Commonwealth Games Cathkin Braes course. Ever since I heard this I was really excited as I know Scottish courses normally have very technical elements to them. Watching footage on youtube also showed the course looked to be fun to ride.

Splitting the trip up meant I arrived at a reasonable time on Friday and was able to walk the course. There were one or two steep sections where line choices were debatable but nothing too bad. One obvious line choice was at a three line section where the A line was quite obviously harder but at the same time slower so that was ruled out instantaneously, with the B being a much better and quicker option. Saturday practice would provide the definitive lines however so I headed back to the luxury of a Premier Inn for change.

Practice went ok with only one revision to my lines from Friday. I hadn’t walked the start loop, but riding it I almost ended up on the floor where in one corner it was almost sand like; I made a mental note to ensure I was better positioned in the race. The one thing I did come to think was that this was definitely going to be a tough race as there was no let up, barely any decent places to drink and the course was very narrow for the majority of its length making passing a problem. I was also disappointed that the course didn’t really deliver in terms of technical challenges and that the surface was for the main part  very loose, to an extent that traction on a lot of fast bends was dubious.
As this was the Championship race it was a Senior field, meaning there were also Expert and Sport riders on top of Elite, so there was a different mix to the start line than normal. I mis-clipped at the start but was soon back on it and sprinted to stay with the group. There was some shuffling within the group as we went through the start loop and when a rider went off onto the grass in front of me I dug in and worked to stay on the next rider’s wheel. As I finished the start loop I had no idea where I was overall but I was in with a group of about four girls and knew I had to keep on the wheel. For about half a lap I stuck with Verity Appleyard who was in front, but following her I took a B line at one section (thinking she knew something I didn’t) and we were passed by Morven Brown (I found out after Verity hadn’t realised the A line was there until that point.....note to self, always stick to your lines!).  After the dual descender there was quite a long climbing singletrack section and Verity started to pull away at this point. I was then passed a while later by Anna Cipullo, who had run off at the start loop, and who seemed to be floating over the flat but rocky singletrack. I was overtaken by two other girls and unable to respond and stick with them over the next lap and a quarter, but on the plus side it meant that I had been higher up the field initially which is a really good sign for me. Towards the end of lap two I was overtaken again, but it soon became clear that this time I was able to respond. Over the next two laps myself and this rider yo-yo’d with me catching her, then her pulling away again. This went on until during lap four and on the climbing singletrack after the dual descender I found I had to back off so as not to ride into the back wheel of her. I had to wait until one of the few wider uphill corners to overtake and after that point I was able to gap the rider and make it stick. I went on to complete another lap before finishing one lap down in 16th after getting lapped.

Whilst I didn’t enjoy the course, I had a really good but hard ride and I felt the signs were all still positive that I am slowly getting stronger thanks to the training and skills that I am being given by AQR Coaching’s Kate and Ian Potter.

Thanks to ever suffering other half Rob Rowe for doing all the driving and lugging a coolbox full of ice to the pits to keep my Torq cold, plus Mark Spratt for handing up cold water bottles for dousing myself with. Finally, thanks to recovering AQR team mate Katie Collins for making the journey to Glasgow and cheering me on whilst still in lots of pain from her shoulder injury. Next up.....holiday to where else but AQR HQ in Luchon.
Posted by James Dymond at 21:22