The race of the large hound & escaping inner tubes!

I'd heard of the Brighton Big Dog race before but mainly because it sells out every year and I'd never been.  So an early entry into the pairs category this year saw Emma and I entered in the mixed pairs whilst AQR team-mates Rachel and Martin were both on solo duties - good last minute training for Torq12 two weeks afterwards.

Turning up that morning, the event arena looked nicely compact and like a friendly local enduro event, albeit one that people travel to from all over the UK!  I left the course practice to my team mates whilst Ant (chief pit bitch) and I got on with pit set-up / putting my feet up! The midday start came around all too quickly and before I knew it, the race was on.  Or perhaps I should  say, should have been on.  Lap 1 was a real shock to the / system!  Giving it some beans on the grassy "intro" lap meant I got ahead of the queues into the singletrack and the same went for the punishing steep climb up the chalky fire-road which was just rideable on my 1x9 setup... but boy did I suffer after that!  Note to self: much better warm-up needed next time! 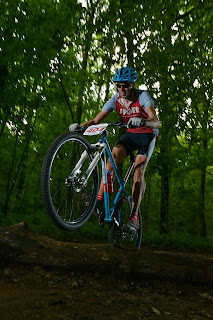 From lap 2 onwards though, the race progressed nicely with us all loving the course - especially once the rather brutal first third was done and the lovely dry snaking singletrack, complete with off-camber roots, log hops and small jumps was laid out before us.

All was going well for our mixed pair, sitting in 3rd with 1 lap to go each and the 4th place pair breathing down our necks. As I headed off for my final lap, sharing a knowing smile with the 4th place male rider, I was ready to suffer big-time on this final 5 miles, knowing that he would be doing all he could to catch me.  Unfortunately, it wasn't to be...

As I flew down the long straight singletrack after the 2nd motorway bridge, there was a horrible crunching sound and I was brought to a very abrupt halt!  Looking down, I found an inner tube wrapped around my wheel, cassette and rear mech - or the carbon fibre splinters that remained of it anyway!  After a rather loud rant about people who leave their discarded tubes on the trail and a hasty attempt to remove the tightly stretched tube and singlespeed the bike, I was very embarrassed to find it was my own spare which had come loose from being taped to my seatpost... D'OH!  Unfortunately though, the singlespeed bodge was only semi-succesful and I ended up running most of the singletrack, riding the downhill sections only and getting a push/tow on one fire road from 2 fellow Cotic riders.... a huge thanks to them!

Getting back to the pits at 5.35 meant that Em was saved from final lap duties but our hopes for 3rd place were well and truly lost.  We feared a pretty terrible result having lost 2 laps at the end but ended up 7th in our category so by no means disastrous.

Despite that, a great race - fab atmosphere, lovely course and we'll definitely be back for a re-match.

Congrats also to Martin who took 9th in a very competitive men's field and Rachel who put in a great 4hr stint before deciding to rest up ready for Torq12. 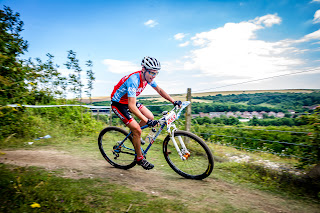