Emma updates us on her recent trip to Luchon...

Long hours at work, racing, sorting houses out all result in various levels of stress. A few weeks prior to the National Champs I’d been under intense pressure resulting in an abysmal Margam performance. However, the work stress was dropping off, I’d been to Glasgow, raced and felt much better, but most excitingly it was ‘proper’ holiday time. Where better to go than AQR Holiday and Coaching HQ, Bagneres-de-Luchon in the French Pyrenees. 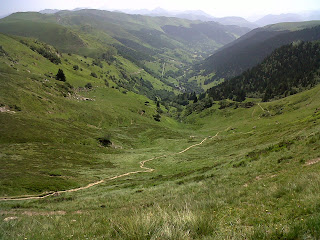 I should have been travelling with AQR team mate Katie Collins, but due to her still recovering from her shoulder injury sustained at Margam, I was going solo. After a long drive I arrived in Luchon on the Friday to try and give myself a day to recover and relax before the proper guiding started. Saturday morning I opted for a quick spin up the Col D’Peyresourde, on the MTB of course. I decided to head up early and was very glad as whilst descending I noted that the temperature had increased significantly. That was also to be the theme for the rest of the week; blue sky, sunshine and very hot! I have to say, some of the French roadies where really jovial which made a change. Saturday also saw the arrival of the remainder of the guests for the week. First up were Sarah and Alan who had already spent almost a month riding in various places, including checking out Vallnord in Andorra before the MTB World Cup rolled into town. Finally Jane, Bruce and their kids rocked up and I was shocked to be recognised thanks to a Bristol Bikefest podium; Jane and Bruce would be tag teaming for the week with one on kids duty whilst the other rode. AQR’s Ian Potter popped round for dinner as well as a welcome chat and to talk through how everything would work and what to expect for the week. 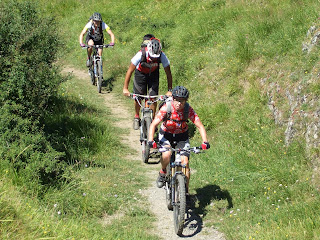 First off-road day on the bike out in Luchon is always a bit of a shock. It may only be ~635m altitude to start with but you can still feel it when climbing. I was feeling quite perky though and really enjoying pacing the longer climbs. I’d also forgotten exactly how steep it is out there, which come the end of day one was to be my downfall. It seems my hands have gotten quite weak and so with the extended time on the brakes during the descents my hands were getting super tired. At the bottom of the final descent of the day I grabbed a little too much front brake to bring the bike to a halt and catapulted myself over the bars! Fortunately, I only winded myself mildly and took a very small hit to my hip. The big saviour however was the armour I was wearing as I’d gone along the ground on my forearms; it would have been two very badly damaged forearms had I not been wearing it. I am glad to say that that was one of only two crashes all week thankfully, with the second being on the penultimate day and a very slow, softer landing version followed by fits of giggles. 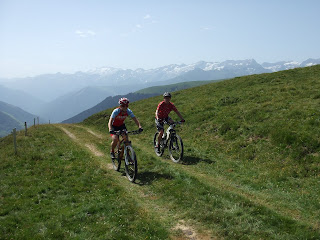 Most of the week comprised of XC riding and various sinuous slithers of Pyrenean singletrack along with some stonking climbs to boot. Luchon is also well supplied with switchbacks and boy did we ride a lot of those. We did a day’s uplift where full face helmets and armour where order of the day and I got my first ride on a very special Cotic Rocket; I was also very lucky to ride it for the rest of the week following a bit of a brake catastrophe on my Soul. 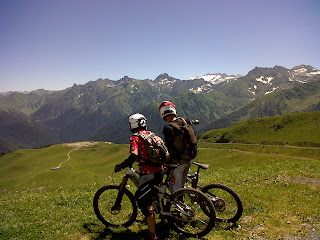 Come the end of the week I was really sad to have to pack up and drive home as I felt I was only just getting into the swing of things. Even though this was a holiday, I was also still in training and I had the Potters assessing me at various times (including those early morning dog walks/runs...not generally found on a ‘normal’ AQR holiday). I was very pleased to hear that I was looking stronger in terms of stability on the bike; since it’s a constant adaptation for me I can’t really ‘see’ these things. But to have people who haven’t seen me for ~6 months say that I take as a real positive and something to build upon. On the flip side the holiday also identified my hand weakness so I can now do something to address this. Having been out in the mountains though I know I now need to be riding steeper, more technical terrain too to push me more as well. This trip was fantastic, and also it means now that my AQR Coaches Kate and Ian Potter can prioritise my training for this winter to address the weak points as well as build on my developing strengths.

As a final reminder of the good times had by all, Alan and Sarah made a short video of the holiday. If I’m riding as well as them when I retire I’ll be an extremely happy lady!