Emma has been at it again, more racing and more blogging...


A busy few weeks before had seen me do quite a bit of riding and I felt like I was definitely making some improvements in terms of my ability to perform over full race distance. With its full on and up front climb, Hopton would be one hell of a test. 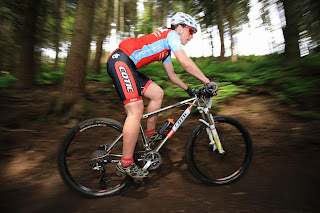 Thankfully, Pearce Cycles had once again arranged some amazing weather; not quite as hot as last year but at least it was dry, bright and warm. I headed out for a practice lap and it was basically up straight off the start line, with the gradient of the climb being the only thing that varied. For a change, I’d also opted to put a Schwalbe Racing Ralph on the rear since it was dry and I reckoned I could handle it; I tend to prefer having the grip level that the Schwalbe Rocket Rons give me normally but thought I’d see how  the Ralph went. The majority of the first climb was the same as the year before, however whereas previously we’d made a right turn near the top, this time we went left. This led to a really wicked little rooty downhill singletrack which offered up multiple line choices and some jumps before spitting you out onto a fireroad at feed zone 2. It also had these great root ‘nests’ that looked like a mass of snakes. After some more fireroad climbing you sped downhill into more singletrack, with a cheeky switchback into a little rise that caught you out (if you hadn’t been pre-warned)  then more twisty, rooty singletrack.  Even more singletrack (got to love it!) after that, where I found having the Ralph on the back called for a bit of skidding the back end round the corner (getting the hang of this more and it makes for getting round the corner a bit quicker). One more section of fireroad climbing before it all went downhill via various singletrack sections, some hard packed, some fresh cut and rooty, and a fast slightly damp fireroad. The last section of singletrack was carved into the edge of the hill with a loamy base, some small drops and which eventually led you to the last tight berm section and a tabletop to ping you into the arena. My hardest decision was whether the course this year was more or less fun than last year! 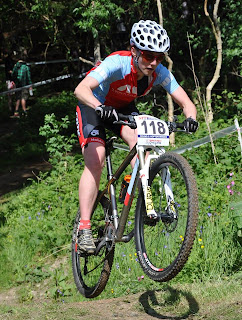 Race day dawned and we were soon lined up. I decided that a full on race start wasn’t needed as there was no dash for the singletrack due to the climb we were to face. The aim today was to pace up the climbs and keep people in sight. From the off I was able to keep relatively close to a small group of girls. They managed to open the gap out a bit as time went on over the first lap but what helped me keep pushing was that I could see Anna (my Erlestoke12 partner) who wasn’t that far in front of me. Coming through after lap 1 I was behind Anna with AQR team mate Ruth chasing me. I seemed to pull away up the steeper climbs but Ruth was stronger on the fireroad aspects and caught me part way around lap 2. In a bid to stay with her I came in quite hot to one of the sections where I’d been skidding my back wheel around only to find that it seemed to have become really polished; the result being I almost got the bike through 180degs whilst it deposited me on the ground. I was soon up and running again although had to take a brief breather whilst my arm came back to life. I tried to chase Ruth back down and on the start of  the lap 3 climb I seemed to once again be making in-roads and closing the gap. However, just to highlight the effect of a moments inattention I made a mistake in the rooty downhill singletrack and went down hard on one of the rooty ‘nests’. I also discovered I’d broken my fork lockout lever too. After making sure I was alright, tucking the now loose lockout safely away and making sure my bars were straight I once more set about the chase. I could see Ruth on the fireroad ahead, but unfortunately I was too far back by now. For the remainder of lap 3 and all of lap 4 I was mostly on my own (apart from lapping some of the slower girls in other categories), but when I came across the finish I had a huge grin on my face. 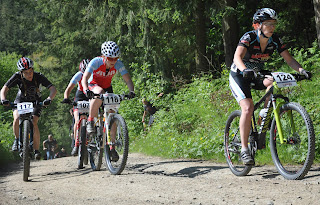 I was so happy with my performance even though I was still the last rider home (one DNF’d). The difference between here and Wheal Maid was tremendous. I was no longer grovelling up the climbs but riding, even though the last lap hurt like hell. I was also able to ride a decent amount of the race with other riders in my category in view. I also felt like a racer again and had done full race distance at a national for the first time this year. This really is a great step in the right direction, and I aim to build upon this and get stronger as the season goes on. AQR Coaching’s Kate Potter is carefully tuning me in a way that allows my body to adapt to the higher intensity exercise and not aggravate my knee at the same time. No rest for the wicked though, Sunday 9th June brings on a 6hr mixed pair at Britsol Bikefest, this time with AQR teammate Matt Prior.