Emma reports from a busy few of weeks racing and training

A couple of weeks after the last national round in Cornwall I had some domestic issues to sort oop North. Some good friends of mine agreed to put me up mid-week whilst I did some house faffing. However, I ensured that the house faffing was relegated to predominately the morning and early afternoon to enable some biking fun to be had. Whilst the faffing wasn’t good for me in terms of maintaining proper hydration and nutrition, the riding was superb; the new trail at Gisburn Forest one evening followed by a trip to Lee and Cragg Quarries on the Friday afternoon (well it was sort of on the way to Nottingham!). I have to say that the amount of time and energy that has gone into both areas is amazing, hats off to all those volunteers who made my rides fun (even though the weather tried to put a dampener on things).

A small traffic nightmare later and I was welcomed with open arms by my team mates Rachel Sokal and Anthony Jordan. I’m not sure which one was worse off from the effects of 24hrs of Exposure; the rider or the help! Rachel was doubly awesome in that when I came down early Saturday morning to get my bike washed she’d already done most of it; thank you Rach (and Ant you were great in your heckling role!). 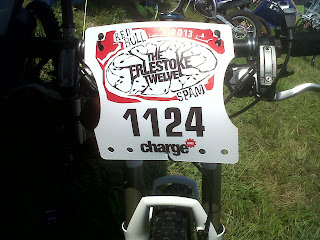 I (or Rach) was washing my bike at silly o’clock in the morning as firstly I was knackered/hungry the night before, and secondly I couldn’t possibly show up to my AQR Skills day with a dirty bike (what would Mr Potter say?). I was joined on the day by fellow team mates Matt and Kirsty Prior, it was just us three and Mr Potter since it seemed some of the others had been scared off! Today we were doing some Advanced Skill  work aimed primarily at maintaining speed through the twisty stuff. We sessioned sections of Sherwood’s singletrack, either following the leader or with Mr Potter behind and observing what each of us was doing. It was also quite interesting observing and then critiquing other rider’s styles. I did have one instance where implementing the ‘more haste, less speed’ philosophy was blindingly obvious as I almost careered off the trail into an angry looking rock. Overall  I had a really good day and came away with a few points that I need to work on to help me get that little bit quicker; push the bike into the trail more and more ‘zip’ when switching sides on the bike.

My mad few days of travel wasn’t over and after my Skills session at Sherwood I hit the road and headed south again. Another early morning and I was at Crow Hill, a fun, twisty, rooty Southern XC course. It was also Southern Champs time. I’d missed round one as I really wasn’t ready, however I love Crow Hill and really wanted to ride and test myself. A good turn out of 10 elite girls meant the front row was full, plus a really good showing in the other categories gave a decent start field. The drawback was that, at the start, myself and another rider had a bit of a coming together, then got partially engulfed as we tried to navigated the sweeping 180° turn and the entire field tried for the shortest line around, i.e. the inside line that we were on. I’d gone well back at this point however the field opened up again and I put the power down to take as many riders as possible before the first section of singletrack. I was told by one of my friends I looked as though I’d been kicked the speed I came past her (helped by a downhill I pedalled rather than freewheeled down). I managed to maintain contact with a decent group of girls for a period of time however once again as soon as the going got tacky and some more power was needed I just didn’t have it. I came through in 8th after the first lap, got caught by another girl and unfortunately didn’t have the power to even stay with her.  The start of lap 3 was interesting as the Open Men had just set off and as I approached that first singletrack section I could see them queuing out of it. Perhaps my politeness of Cornwall had worn off as I just  muscled my way through (with some ‘pleases’ too of course) and worked my way around some of the guys until things got moving, a really good overtaking practice session I thought (we won’t mention the small departure onto the floor when I reached the limit of the grip envelope). In doing so I must have also overtaken 8th place briefly as she passed me again, much to my confusion, on the next fireroad! Muscle fatigue was certainly setting in as the race progressed and the course degraded, however towards the end of the race I started to see another rider getting closer. I tried my hardest but couldn’t catch her, finishing in 9th in the end and just under 2mins behind 8th but with almost a 6min gap to 10th. Although I was absolutely shattered I was really happy with how I’d ridden, feeling once again like a racer. Throughout the singletrack I had also been thinking about the skills session I’d had the day before and was really enjoying trying to put those aspects into practice when the course allowed. My speed and power will eventually come as my training slowly ramps up. I said in my previous blog I would be looking for little indicators and I felt that this race was a really good indicator of progress.
The few days after the mad dash around the country and I was super tired plus my knee was complaining, so I opted to rest it up. Thankfully the knee was really just feeling tired and perhaps a little swollen but there was fortunately no real pain. A few days later and I was feeling as good as new. With the rest of my team mates otherwise engaged I was looking around for a pairs partner to tackle SPAM Biking’s Erlestoke12 (although the 6hr not the 12hr race). Finally, about  16hrs before the 1200 start time I managed to talk Anna Cipullo, an MBSwindon/Hargroves Cycles elite rider, out of a solo ride (she thanked me for it afterwards!).  Anna, as the faster rider, started; although the start was a bit of shock being 8mins early and she’d barely gotten her wheel swapped back over after getting off the turbo. We actually had no other real competition as there were no other 6hr Female Pairs. However, our mission was to at least beat the 6hr Female Team and finish as high up in the other pairs categories as we could, bearing in mind we might find ourselves merged into one of them. Anna came through after Lap 1 with only the 12hr Female team of Four4th lights in front. I started a bit hard and paid the penalty on certain parts of the course but it was a fun course so the small torturous bits were just about bearable. It was dry, there was dust, the singletrack was rooty and twisty (more AQR skills practice), steep little ups, fun downs (even a Redbull timed section) and one hell of a grass slog (thankfully dry too). With laps around the 40min mark for us it ended up with us both doing 4 laps. Anna was pretty consistent throughout, however my lap times did drop off a little more as the day went on but I maintained as high a tempo as possible on all laps, even when my legs were screaming at me; I was however very glad I wasn’t soloing. SPAM were very kind giving us our own podium in the end (you’ve got to be in it to win it), however we were more chuffed with having beaten the female team, come 4th in the mixed pairs and 10th in the Male pairs, not too bad really. I really am so very thankful to Anna for agreeing to partner with me, it meant that I did one hell of a hard interval session which will help make me stronger in the long run; of course no more friendliness as battle once again commences at the next round of the British Cycling Cross Country Series at Hopton!