Kirsty reports from a dry & dusty Enduro 6...
With our 2 slightly crazy teammates, Martin and Rach, in the final throes of preparation for 24 hours of Exposure, the ‘Special Six’ (OK, maybe some of you are too young to remember Enid Blyton’s intrepid adventurers) decided to have some fun in the sun at Singletrack Enduro 6.

The sun shone, and Catton Park did not disappoint.  The 10k course twisted and turned its way through bluebell woods, with some needing to watch out for their bars!!  A grassy climb or two, a swoopy bomb-hole section, natural jumps and a super-fast grassy descent back into the arena.  Dry and dusty throughout, this was Catton Park at its best.

The team line up was:
James and Kate – mixed pairs
Ian and Matt – male pairs
Kate and Kirsty – female pairs

The racing was fast and furious throughout, no doubt helped by a little internal AQR rivalry – who could get the fastest lap? * 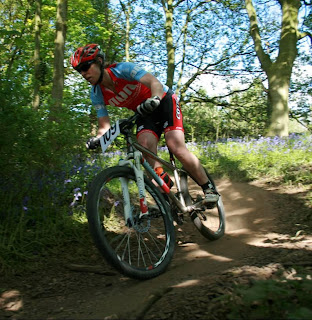 After the ‘Le Mans’ start (I guess it was inevitable I would have to do the run, given my recent foray into duathlons), Katie and I settled into our rhythm.  We had some close competition with the Mule Bar Girls, but we had the lead and were inching our way to a decent gap.  Then the inevitable happened.  Psssssstttt… the sound of air leaving tyre…  OK, stay relaxed, we train for this kind of stuff don’t we?!  After trying but failing to inflate my back tyre with both cannisters, I decided to run the rest of the lap.  I reckon I ran 3 or 4k in SPDs… NOT FUN!!!  Another attempt, with a borrowed pump, gave brief respite, but this was short-lived and in total I lost around 10 minutes.  And the lead!!

After running with the bike, I was spent – so respect to Katie for stepping up and putting in a double lap while I regained my mojo.

The chase was on…  I put around 3 minutes into the opposition on my penultimate lap… it was all to play for.  Another solid lap from Katie, and I headed out for our 10th and final lap with about 4 minutes still to find.  I pulled out all the stops, but it wasn’t to be.  Congrats to the Mule Bar Girls on a well-deserved win… you earned it!  Katie and I took second, just two and a half minutes adrift, and a good 25 minutes clear of 3rd place. 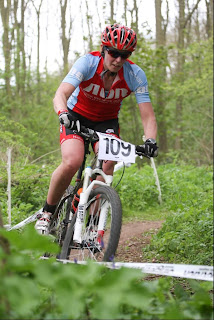 There was great racing across all categories.  The lead in the mixed pairs was changing hands virtually every lap – at times there were only a few seconds in it.  Eventually James and Kate had to settle for a hard-fought second place.  The boys were also in the mix, finishing 12th in a highly competitive category… and more importantly, winning the ‘fastest AQR team’ award for their efforts.

Not content with the official race, the Potters indulged in a little healthy ‘Mr. and Mrs.’ competition – accolades finally going to Mr. Potter, although this one also went right to the wire.

A few personal highlights from the weekend:
- Pre-race spag bol courtesy of the Dymonds (thanks James & Jo!)
-  Meeting a 12-week old husky pup
-  Being waited on hand and foot in the pits (thank you Martin and Rach!!)
-  Team practice lap
-  Chasing down the Mule Bar girls in our last few laps.  We didn’t quite make it, but it was great to have such a close race!
- Having such an awesome teammate… thank you Katie, it is a pleasure to race with you!