Having finally found some time to start catching up I thought I best start with the last round of the National MTB Series (before the next one is upon me).

Just about two weeks before this race I was at the physio and the decision was to try out some wedges that fit between my cleats and my shoes; the wedges are tapered and so would angle my shoe slightly so that it mimicked the angle my feet naturally hang at, whilst still allowing the shoe to clip into the pedals whilst fully horizontal. By doing this it was hoped that it would reduce foot rotation inside my shoe. This has been thought to be one of two issues (the second being an asymmetric pelvis) that has resulted in me getting knee pain, since my knee has effectively been piggy in the middle of two unnatural rotations and has meant I’ve had to back off the training. Initial results seemed promising and after a week of low volume and intensity work I went out for my longest pain free ride since before Christmas. It was now starting to look as though AQR Coaching’s Kate Potter could start building me back up. However, I have a long way to go as I’ve had to go back to Base, day 1 (therefore for me it’s like being in October again). 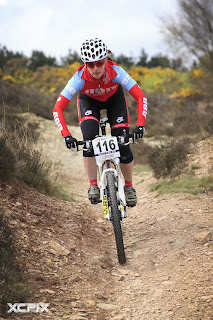 So, I’d had a ride the week before at Cwmcarn and had got my rocky eye back in and boy am I glad I did. I arrived Friday evening to a blowing gale in the arena field with the course dropping below the arena level into the disused Copper mines area.  This being a ‘Horton’ course I knew it would be technical and I’d seen some pictures and video footage that showed some of the course. I opted to do a course walk on the Friday evening, something I have never done before but am glad I did.

The ‘Ridge Run’ was a really long section of gravity assisted singletrack straight out the arena, but the consequence was that there really was nowhere to overtake for a good number of minutes until you got to the first climb. A loose climb, split in two, followed into more singletrack and then the first A/B line split. Some mini rock gardens presented themselves and then this led to ‘The Leveller’. Basically, the right line was an off camber, with a root across it, line and the left line was pretty much a small sheer drop (well it looked that way).  After some fluttering of the heart I then analysed it a bit more thinking less about what it looked like and more about what a bike wheel would be doing; based on that I was taking the drop and did so throughout practice and the race.  This then led to ‘Down to Brown’ (dodgy name, but the water at the bottom, in ‘Toxic Pond’ was brown!). A/B line choices here where B lost you quite a bit of time. The A line was a slightly tricky entry  to a steep, loose left hand turn which then put you into a steep right hand turn with a small drop off at the bottom and a left turn out (unless you wanted to end up in ‘Toxic Pond’).  The technical rider in me wanted to nail this, and in practice the next day it took a few attempts and words with myself about where I was looking but I cleared it. Some more loose climbing followed to what looked like the surface of Mars and then onto more singletrack to the last A/B line section ‘The Wall Ride’. This was a bus stop type feature and required a certain technique and power to clean, which even in practice I couldn’t manage so I made the decision to take the B here. More climbing, a loose descent, more climbing still, singletrack, small woodland section and then into the arena. A really lovely course with some good technical challenges.  My Cotic Soda was loving the course also, with my Magura Durins soaking up the drops,  and the Magura Marta Brakes allowing me to really feather my speed for obstacle entry I was properly set. 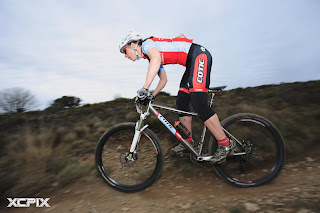 With me not having any real power in my legs I knew I wouldn’t be competitive here however my aim for this race was to finish and to ride technically well. After all, this was a new course and I would come away with more lesson learnt no matter what the outcome. As suspected I was engulfed at the start and also a little too polite so went into the singletrack last, whereby I was held up as I could descend faster than those in front of me. That advantage was soon wiped out when they were able to climb away from me. The group of girls immediately in front steadily pulled away as I couldn’t answer their climbing pace, however as I popped out of the A line at ‘Down to Brown’ I was suddenly around some of them again and had gained enormously. Unfortunately, as the race went on I just couldn’t keep that advantage and with the amount of climbing soon lost touch. I then concentrated on riding well. I did crash on lap 2 at ‘Down to Brown’ and lost some time there, but again knew what I’d done wrong (not looking properly where I was going) and rectified this on lap 3. We had World class representation in the form of Topeak Ergon’s Sally Bigham and she lapped me towards the end of lap 3 which meant I was pulled from the race by the Commissaries. Even though the race was shorter than I’d hoped for me, I’d been really grovelling up the climbs and therefore it was probably for the best in the end as I was struggling due to my lack of form. I then hit the turbo for another 15mins to get the legs spun out.

Whilst not a result that I am proud of, I am really proud of how I dealt with the course from the Friday night course walk, to the pre-race day and race day riding. I would have been fooling myself to expect a really good result when I haven’t been doing that sort of training, however it is a really good basis on which I can now start to build. Over the coming months I’ll be looking for progress indicators to help keep me on track as whilst the wedges have helped me, they haven’t cured the underlying problem.

Thanks to Darren Ciolli-Leach for the photos
Posted by Rachel at 15:24