October.  The leaves are starting to change colour, the nights are drawing in.  My team mates are either enjoying a well-earned break after the cross-country season, or starting to think about base training for the year ahead.  Some are even drawn to the pain locker of cyclo-cross.   I, however, am dusting off my running shoes ready for the offroad duathlon season.

Clumber Park was the first race in the inaugural Midlands Offroad Series, with two more races to follow at Sherwood Pines and Holme Pierrepoint.  It’s great to see more offroad duathlons springing up all over the place, and there was a healthy turnout with some strong competition.
Coming off the back of a 4-week break with virtually no running and riding, I was interested to see how I would go.  Would I have retained my fitness from the Haute Route?  Or had I eaten too many post-race ice creams?! 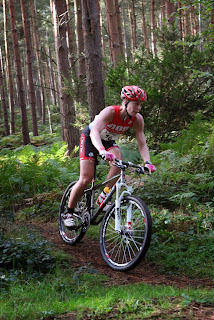 I had an entertaining evening pre-race.  All my Nottingham-based team mates had deserted me and scattered to various corners of the British Isles, so I stayed at the local Youth Hostel.  It had been taken over for the weekend by the “Rough Stuff Fellowship” – average age appeared to be approximately 60, with enough tales of adventure and misadventure to last a lifetime.

Anyway, back to the race.  For me, duathlon is like a game of cat and mouse.  Running is not my strong point, so the first run is all about limiting the deficit and trying to hold something in reserve for the rest of the race.  Then comes the fun bit… how many people can I chase down on the bike.  In theory, if I can catch them by the halfway point I stand a good chance of staying ahead.  At Clumber, there were 3 girls ahead of me after run 1, so I had 3 main targets to chase (and countless blokes as intermediate targets).  My first catch came early on the bike, the second was close to halfway, and the third was past halfway.  The game then is to put as much time into them as possible before second transition.  It seemed that my week in the Pyrenees was still providing some fitness benefits, and I was enjoying finding my flow on the singletrack sections, so fingers crossed it would be enough.

I led into second transition, only to discover that I had racked my bike in the wrong place (this was the first duathlon I had competed in where there was a ‘right’ place, all the others you simply racked your bike wherever you chose to in the transition area).  I was slightly bemused when the race director asked “Are they your trainers?”!!!!

And so the hunter becomes the hunted.  Have I put enough time into my competitors on the bike to stay away on the run?  At Clumber, the second run was an ‘out and back’.  I managed to hold my lead to the far point of the course, and counted the steps on the way back until I passed my closest rival (who high-fived me… nice bit of camaraderie J).  I reckon I had just over a minute.  Dig in, she’s a good runner but you’ve only got 1.5k to go…  Focus on your own race, don’t look back…
Phew!  That was close.  1st place :-) 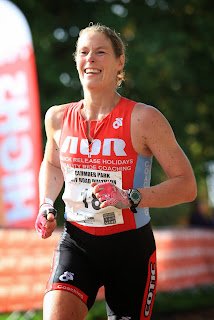 Great race in some good company.  Looking forward to the rest of the series.

PS Turns out I narrowly avoided disqualification for racking my bike in the wrong place.  Thankfully no-one complained to the race director so I escaped with a ticking off.  Lesson learned!!!
Posted by James Dymond at 20:14