If Carlsberg did Easter...

Kirsty and Matt look back at the perfect Easter...


Kirsty: 5pm Thursday, Matt and I are sitting at home contemplating how best to spend the Easter weekend. Fast-forward 24 hours, and we are sitting in the café in Alte, Portugal with a pot of tea big enough to feed the 5,000, a huge figoo snack, and an even bigger smile on our faces. Having secured the last 2 seats on the flight to Faro and the last available room in the hotel, we knew this was meant to be!


The beauty of Alte – aside from the olive and orange groves and the Mediterranean climate – is that it is less than an hour from the airport. After an early flight from Bristol, we had unpacked and were ready to hit the trails before midday! 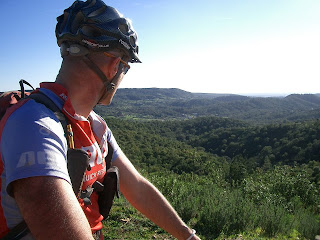 A gentle start, involving more than 1 café stop (oops… wasn’t meant to admit to that one!!), confirmed that we had made an excellent decision. After the sub-zero temperatures in the UK, it was a pleasure to finish the ride with the ability to feel our fingers and toes (albeit slightly bedraggled after a warm rain shower!). 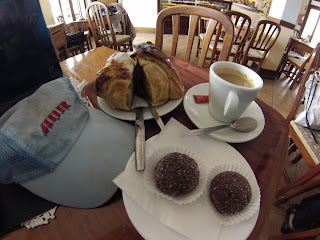 Matt: First things first… what bike was I going to ride? What more could I ask for than a brand new Cotic Solaris 29er from the AQR hire fleet – I can’t believe that Potter trusted me with that, especially when I crashed the bike before leaving the workshop – that will teach me for riding the bike indoors on shiny tiles!

It is great to ride somewhere completely different, especially in familiar territory from last year’s trip. As usual there were some Potter challenges along the route and having successfully negotiated Abby’s bath, Hannah’s bath and Paul’s dip, I then had the honour of being the first bloke to clear Ribby Jibby.

Bring on another day’s riding and some sunshine for tomorrow.

Matt: Once coaxed out of bed, started the day with an early morning run in the sunshine - what a contrast to yesterday’s rain. Getting up early in the morning is always an effort but so worth it once you are out there! (I hope Kate doesn’t read this otherwise she will be introducing more early morning sessions before breakfast!)


Kirsty: After breakfast, we set off in the direction of Rocha da Pena. The riding was varied, with a few cheeky techy ups and downs, and some nice rolling sections. After managing to slide out in the mud, I found myself half way down the bank on a section already known as ‘Kirsty’s Kerb’ (after I decided to take an “interesting” line a couple of years ago)… twice in 3 years… much to Matt and Mr. Potter’s amusement (who put that rock there???!!!). Happily, I redeemed myself down the drop-offs, and even received a round of applause from a group of Portuguese riders (who we then proceeded to beat up the climb – Potter training must be paying off!).

Kirsty: Another early start – in fact an uber-early start as the clocks went forward, and we made the mistake of adjusting our phones last night, only to find they also adjusted themselves automatically, so our 6.45am alarm actually went off at 5.45am… doh!! (Having realised our mistake – apologies to the night-porter for waking him up – we snuck back to bed for half an hour.) Today we earned our breakfast with a short run followed by a Kate special – run throughs, stretching, balance and the Potter ‘bleep test’. We also had two four-legged friends for company – the Potter pooches Dylan and Marley. Dylan in particular kept distracting us with his best ‘please throw my orange for me’ look.

Matt: Another great day’s riding – a bit on the wet side, but we didn’t let that spoil our fun. The ‘Three Peaks Challenge’ was on the agenda today, which has now been renamed ‘Meet the Fockers’.


Had a good post-ride coaching chat with Kate, looking ahead to our big goal for this year (more on that in later blogs, but suffice to say it involves the Pyrenees, some big climbs and a road bike). Plus ideas from Ian on how to reduce the weight of my road bike – bike weight is one of Mr. Potter’s fortes! 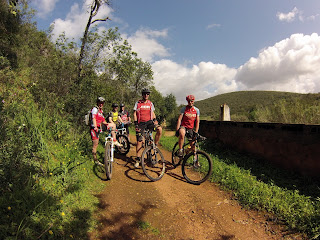 Matt: Yippee!! The sun’s shining!! It must be time for the river ride. The river was in full flow, which meant we got to ride the flowy river singletrack both ways, along with some cheeky new trails and a great descent back into Alte for our final cake stop.

Kirsty: A great day’s riding to top off a wicked long weekend. Good food, good company, and a hint of a cyclist’s tan. Can’t think of a better way to spend my Easter… thanks Kate and Ian! 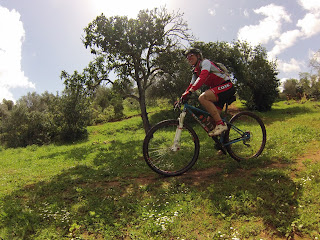