How do you prepare for such an event, especially in my case when I have never done anything like this before - what to expect, was I going to be able to cut it, have I done enough training?  All those questions and doubts running through your mind.  What were all those early morning rides with no food all about and those crazy training drills and those consecutive days of long rides (Sat Bristol to Southampton - 100m, followed by Sunday Somerset Gran Fondo Road Sportive- 112m with 2,500m of climbing) which Kate set (or should I blame that one on Kirsty), all Kate’s talk about ‘brain training’ or should I say ‘brain teasing’, well I was soon to find out why!? 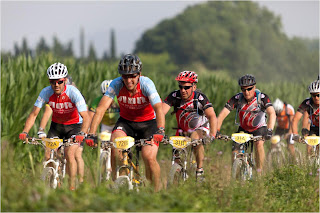 TransPyr day 1 (one of the longest days) started with temperatures soaring and the worst cramp I had ever experienced.  When crossing the finish line it struck me (us) that this race was going to be about survival.  It must have been hot - even the native Spaniards were sheltering in the smallest amounts of shade.  At the end of the first day's racing recovery now really mattered - Carol was there with our recovery drinks and rice cakes at the ready.  [Interlude- yes for some crazy reason Carol came on holiday to support us both through the good times and the bad - thanks Carol very, very much appreciated- except dragging me out of bed at 6am every morning!]  A dip in the cold river and elevated legs back at the camper van, a Carol sandwich, followed by a spot of bike maintenance a shower and a hearty dinner did the trick - we really wished there was more time but this was how it was going to be & we had to get used to it! 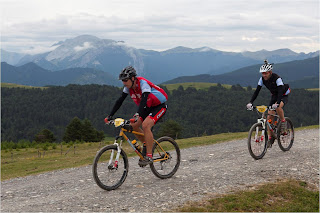 Days 2-4 we continued riding - my body and brain kept going although by day 4 I was feeling the pressure- as Kirsty will tell you when I phoned her that night!  It felt like a race but were we really "racing"? - we had some longish stops at the feed stations, luckily cut short by Ant keeping us moving (thanks mate just what I needed a kick up the backside). 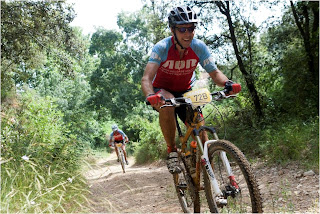 Day 5-7 with a few mechanicals behind us- a failed freehub (good job I had a spare wheel!) noticed at the end of the day whilst prepping for the next!  Training, recovery, maintenance, food, rest, sleep anything else to think about!  Oh and then there were the tyres... I have a reputation for being a wheel wrecker but this race was all about tyre wrecking.  The first one lasted about 2 days, the second lasted just a little bit less and then the third somehow managed to keep going - despite developing a bubble on the last day- toothpaste tube tyre boots were a godsend - although a knife to let the air out of the bubble was all required in this case- thanks to a local riders tip! Luckily it was only wheels that suffered and our Cotics kept going perfectly!

The race seemed to get easier (it didn't really) and it was not just because Kirsty came out to cheers us on and cheer me up!), my body was getting used to it and I was just learning to suck it up and we were both getting more into the racing mentality- hitting it hard after the last feed station drafting all the way making sure no one passed us and getting back as soon as possible- those extra hours back at base were a great help with the recovery. 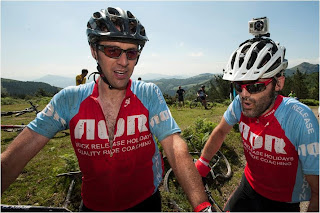 Day 8 – ‘The Finale’: the race timing stopped at feed station two- mental note in race briefing- hit it hard, race heads on get to feed station two as quickly as possible- just like a cross country race!  Think we were 10th or 11th pair to get there, we finished ahead of quite a few teams who had consistently been finishing just before us.  I’m not sure that Ant appreciated me racing at breakneck pace that day (him coming from a 24hr hour endurance background) - but we worked as a team and achieved our goal.  The rest of the day was amazing, chill out riding, chatting to locals, negotiating ancient villages, coastal paths, a ferry crossing and a glass or two of bubbly followed by a dip in the Atlantic to complete the whole affair.

In all, I would recommend the TransPyr to anyone... but beware what you are letting yourself in for!