BMBS Round 2 - Ruth's view from the front!

Ruth's slightly belated write up of my recent experience at the second round of the British Mountain Bike Series at Dalby Forest on 17th April 2011... 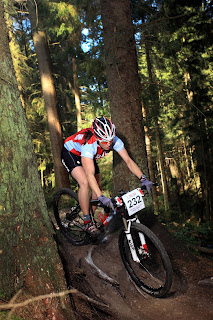 Photo by Darren Ciolli-Leach of XCPIX
Initially my goal for the 2011 season in the Expert Women category was to get a podium. I wasn’t too worried about which position on the podium I achieved; I just knew that after putting in some hard work after an unimpressive season for results in 2010 I really wanted to earn myself a national level podium.
At round one of the BMBS I surprised myself by not only achieving a podium, but also achieving 2nd place, just 30seconds behind 1st place! Well, never in a million years did I think I would achieve my goal for the year at the first round.
So, in the run up to the second round of the series, I was apprehensive – to say the least. I knew that I needed to prove that my result at Sherwood wasn’t a one off! So I decided to get up to Dalby nice and early and spent time getting used to the course and the way my new Cotic Soda race bike felt on the terrain. With Kate’s expert coaching and guidance behind me I had my mind in a good place and tried not to put too much pressure on myself and just practiced the lines on the course that I was comfortable with and that I knew I could ride easily during the race itself.
On the morning of the race, I worked hard to keep myself calm and focussed and keep my nerves under control. Dalby is a technically challenging and mentally demanding course and I knew I would need to stay focussed the whole way.
The race got off to a good start – I led the pack out into the first corner, with only a couple of Juniors overtaking me initially into the first bit of singletrack. At the end of lap one I was in 3rd place, with 2nd in my sights and legs feeling good.
Unfortunately by the middle of lap two my front mech, which has been on its last legs for a while, finally gave up and I was left to race the remainder of the race with no big ring, which didn’t help for those sprinty sections where time can be easily made up – or lost!
I fought hard during the 2nd lap and came through the arena in 1st place, with 2nd right on my heels and fighting all the way into the first singletrack section.
After some switching around with various overtakes on the nasty uphill sections at the end of the third lap I was back in 3rd place and hot on the heels of both 1st and 2nd place! I knew this was going to be close and I knew I couldn’t let the two riders in front of me get away.
So I gave my last lap all I had left and kept with 1st and 2nd right until the bitter end. We dropped down through Medussa’s drop and up the final big climb. When we dropped back down onto the last fire road I decided to make a go for it and sprinted past both riders into 1st place. I then led into the singletrack passed Worry Gill and up the climb to the final bit of singletrack before the arena and that last drag up to the arena felt like an age with two competitors breathing down my neck! I knew that I just had to keep them behind me through the singletrack and out into the arena and then hope for the best that I could sprint fast enough with just my middle ring to hold onto my win!
As we came into the arena we heard the shouts from our supporters and at the last corner there was nothing in it. I sprinted out of the final corner, giving it everything I could with only my middle ring for power, and could see 2nd place creeping up on me, but thankfully I just held it and took the win with 1 second between me and 2nd place, and only 3 seconds ahead of 3rd place!
I was over the moon to win the second round of the British Series, and it was such a great race – one of the best to watch for a long time according to a friend! My new race bike was amazing, and I am now treating it to some TLC with a new front mech and a fork service to make sure it’s rearing to go for the next round, I just need to make sure my legs are too – and with Kate and Ian Potter and the AQR team behind me, I’ve got all the support I need! 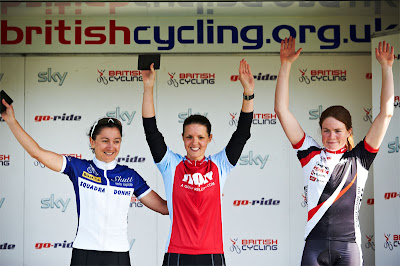