Hot of the press, the AQR Down-Under crew of Claire and Paul Aubrey made some podium appearences at the Scott 24hr race in Canberra, Australia over the weekend! The Scott 24hr is the biggest and longest running 24hr race in Australia and was run at Stromolo Forest Park which held the world championships only a few weeks ago.
Before the race got started properly, Claire enter the prolouge time trial, with the possibility of being crowned the fastest women at the event. Without much racing under her belt Claire rode sensationally posting a time which let her step onto the third step of the podium. It was close, 13 seconds sepearted both first and second and second and third. During the event, Claire backed up her hot lap with the unoffical fastest night time lap.

The main event start and midday on Saturday and by the time dawn broke on Sunday morning we knew it was going to be really close for the podium positions, 20 minutes separated the first 4 teams. All the members of the Malcontents stepped up and left everything on track to move up into third position in the Mixed 6 category. 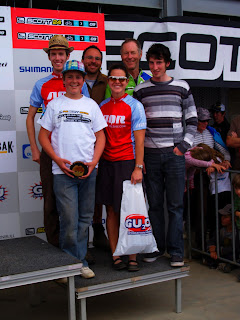 Some photo's will follow once the house is back in a livable state.
Posted by Paul and Claire's MTB Adventure at 22:55